We take a look at the best golf drivers. Is now the time to upgrade? Let's see what's on the market

So, what’s been happening so far as technology is concerned – specifically with the big stick, and what are the best golf drivers currently on the market?

Some of the most significant advancements concern face technology and aerodynamics – and there are even more options to choose from with every ability and swing type well catered for.

We’re also seeing new, intuitive ways to adjust the weighting of the clubhead… and even the clubface itself.

Be honest with yourself about what you want to get from your new driver. Do you want more distance? More fairways? Less of a slice, perhaps?

The best golf drivers can provide a little bit of everything, and below are some of our favourite models in this regard.

Additionally, take a look at some of our other guides on the most forgiving drivers, best golf drivers for distance, or the best high handicap drivers.

The best Titleist drivers are often complete packages and the TSi3 continues that trend.It features a more compact, pear-shaped profile and a new SureFit CG Track positioned around the rear skirt, allowing players to alter their shot shape and launch characteristics.

Comparing it to the outgoing TS3, we prefer the more rounded toe and the quieter thud it produces – which is closer to what you might experience with carbon fibre drivers like Callaway Mavrik and TaylorMade SIM.

We believe many golfers will also prefer how the sole weight setting is now visible – with the TS3 you had to unscrew and remove the weight to see what it was.

With the multitude of settings and shafts available, a custom fitting is a must to get the most out of it.

Gains over the TS3 will vary from player to player but we certainly got much more out of the TSi3 than we were expecting.

With its more varied adjustability and extra forgiveness on offer, it will appeal to a range of golfers, not just the better player.

Hoping to become one of the best TaylorMade drivers ever made, SIM2 carries over the Asymmetric Inertia generator and Speed Injected Twist Face from last year’s SIM drivers, but the head of SIM2 is now created using a Forged Ring construction made from aluminium, which saves nine grams of weight.

The sole is made entirely from a nine ply carbon fibre for even more weight savings and better airflow as TaylorMade have done away with the sliding weight track, which TaylorMade say was redundant for the majority of golfers.

The new design of all three drivers (SIM2 Max and SIM2 Max D pictured below) allows for a more specific internal CNC milling behind the face, which means there is no longer a need for injection ports on the Twist Face, just one is required in the toe. It also means that 23 per cent more shots fall into the high COR category..

The SIM2 driver has a TPS fixed front weight that lowers spin and can be adjusted for swing weight. It has a 12 per cent larger face versus SIM that increases forgiveness, helped by a 16g back weight.

The SIM2 Max has a 24g back weight for even more forgiveness and a five per cent larger face than the SIM Max. On the SIM2 Max D, the entire Inertia Generator and 22g back weight has been moved towards the heel to increase draw bias for serial slicers.

The new line of Epic 21 drivers feature the next generation of Jailbreak called Speed Frame designed using Artificial Intelligence to form a completely new shape, connecting with the head at four different points top and bottom to provide extra rigidity in the horizontal direction.

The result, Callaway say, is a five per cent increase in efficiency and when combined with a lighter triaxial carbon crown and enhanced face design unique to every loft, should increase ball speed and forgiveness as well as spin consistency.

There are three models to choose from. The Epic Speed is the fastest as it has the same cyclone shape as last year’s Mavrik driver where the tail of the driver lifts up to improve airflow over the head during the swing to increase clubhead speed for the same amount of effort. 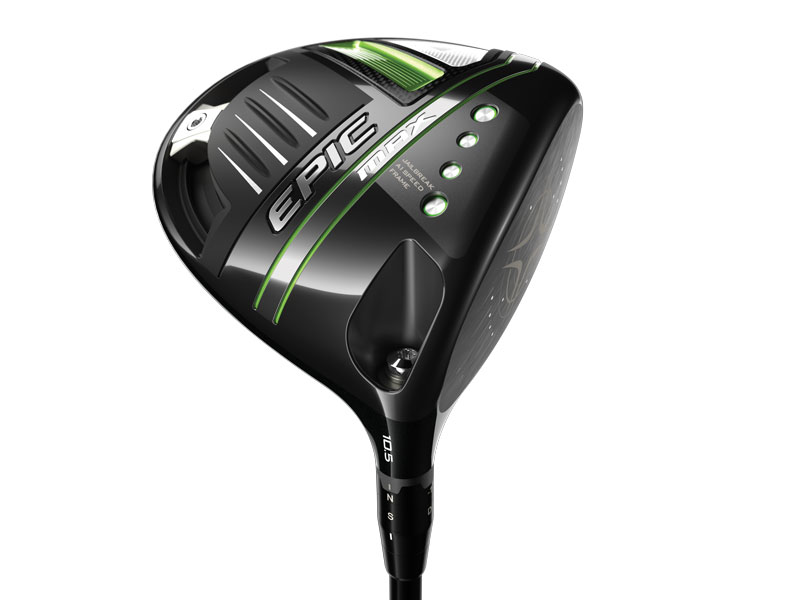 The Epic Max is the most forgiving driver and highest launching of any Epic driver to date. It features an adjustable 17g weight that creates up to 16 yards of shot shape correction, which rises to 20 yards when you factor in the draw settings on the Opti-Fit hosel.

Then there’s the Epic Max LS, which is the better player driver with low spin. It is the most fade capable of the three drivers thanks to the 13g sliding weight providing 14 yards of shot shape correction.

Delivering both low spin and significant forgiveness, Mizuno’s ST200 is a high-stability driver built around a resilient Beta rich forged, multi thickness Titanium face that maintains its characteristics over time.

We gained 15 yards on the older model with the new ST200G – great performance and evidence that Mizuno’s drivers continue to get stronger and stronger and can lay claim to being some of the best golf drivers on the market.

Finally, there’s the lightweight ST200X, which delivers a high launch with a draw bias and has been designed to work best with Mizuno’s own Japan specification MFUSION 39g shaft to help those players with mid to lower swing speeds.

We liked it so much we also featured it in our guide on the best golf drivers for mid handicappers.

The name comes from the Radial weighting, whereby the distance between the front and back weights has been increased to create a more optimum blend of faster ball speed with low spin and forgiveness to maximise performance for all player types.

In the three Radspeed drivers, Cobra has managed to significantly increase something called the radius of gyration, which is the distance from the club’s centre of gravity to each weight location, to produce extra yardage in different ways.

The 460cc Radspeed driver has forward-biased weighting with 28g positioned in the front, (16g fixed, 12g adjustable) and 10g in the back (8g fixed, 2g adjustable). The two adjustable weights can be interchanged to fine-tune the desired launch and spin performance. 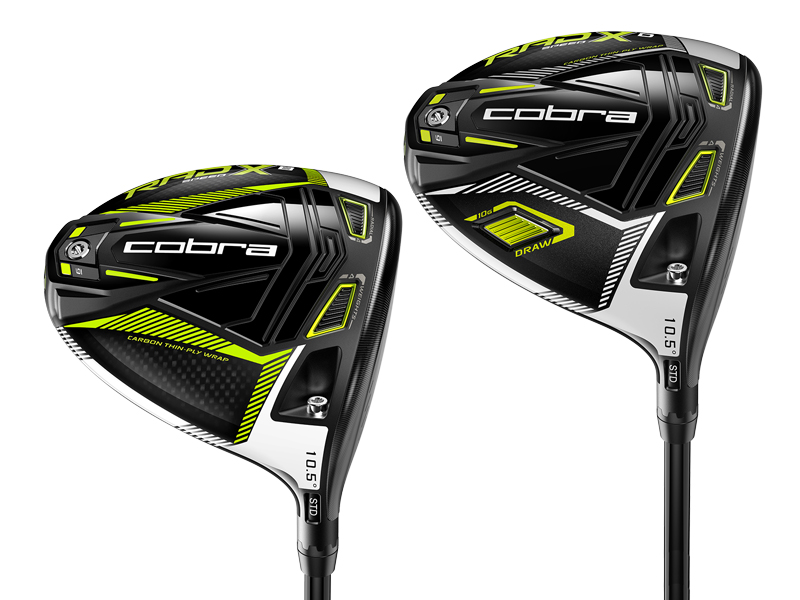 The Radspeed XB (Xtreme Back) features an oversized address profile and 20g of weight positioned in the back (14g fixed and a 6g interchangeable weight) and 8g of fixed weight in the front, making it arguably Cobra’s most forgiving driver to date. There’s also the Radspeed XD (Extreme Draw) for golfers looking to negate a slice.

+ Increased forgiveness and accuracy over G410
+ Better fitting options across three models
– No obvious gains in distance over G410 on centred hits.

To achieve the new performance levels in the G425 Max, Ping has implemented a new 26-gram tungsten movable weight called a CG Shifter, which is made possible by weight savings from advancements in the driver’s dragonfly crown design.

The weight can be secured in one of three settings – neutral, draw or fade – to influence forgiveness and shot shape. The average MOI increase is 14 per cent across the three weight positions compared to the G410 Plus.

It employs a 17-gram CG shifter in the same three settings to fit the launch conditions best suited to the golfer’s swing and desired ball flight. There’s also the option of the G425 SFT for golfers that struggle with a slice or miss to the right.

The Honma TR20 drivers feature a 440cc model (pictured above) and a 460cc version, the former of which is designed for the better player seeking workability without sacrificing distance.

We enjoyed the solid feel and with a custom fitting – which we’d stress is essential – it has the potential to compete with the very best.

Those seeking more forgiveness have the option of selecting a different weight setting, or going with the 460 version instead.

It stretches along the crown and sole, flexing at impact and reflecting that energy back into the ball for increased ball speeds at impact.

It may lack adjustability, but it certainly has the power to straighten out a slice.

Due to the new Miyazaki C. Kua shaft, which pulls weight from the length of the shaft and repositions it on the grip end, it also felt easy to swing quickly.

Designed to help higher-handicappers hit the ball further and straighter, the Launch Pad features an offset hosel to create tighter dispersion and at just 272 grams, the driver is very lightweight to maximise swing speed.

We found this driver really easy to hit, and it produced a ball flight which was noticeably higher than most other drivers on the market.

The lightness of the club is likely to appeal more to those golfers with slower than average swing speeds – and its price is attractive too (RRP £269). It is unquestionably one of the best golf drivers for beginners currently on the market.

Rebound Frame Technology works by layering alternating zones of flexibility and stiffness that work in tandem to focus more energy into the ball at impact for more distance.

The ZX7 driver delivers a slightly more penetrating ball flight than the ZX5 and adjustability comprising of 4g and 8g sole weights to give any player their desired launch conditions or alter swing weight.

It wasn’t just the looks which impressed us – it combined good speed with the ability to control accuracy in a multitude of ways.

The smaller more rounded profile of the ZX7 will suit the eye of the slightly lower handicapper it has been designed for.

Callaway claims its use of Artificial Intelligence (AI), a new face material and Jailbreak has unlocked extra performance for the high handicapper who struggles with a slice.

The larger A.I. Designed Flash Face SS21 has been made of a super strong, heat treated TA-15 titanium, which allows for the complex face architecture required to promote optimal speed, forgiveness, and spin characteristics.

Clearly this driver is designed for golfers who tend to utilise a large portion of the face over the course of a round.

It feels light, partly down to the 55g shaft, but when you find the middle of the clubface it also feels incredibly explosive and stable, even on mis-hits.

What to consider when buying a new golf driver?

When purchasing a new big stick, it is crucial to ask yourself just what you need from it.

Is distance your main priority or are you looking for something to help you find more fairways?

We’d always recommend a custom fitting with a PGA Pro but if you know what you’re looking for you can make an informed decision.

If accuracy is what you’re after, go for something with a high MOI or adjustable weights to help alter spin and flight characteristics.

If distance is key to you, look at a low-spinning driver to help ensure your ball doesn’t balloon too much.

If you enjoyed this guide on the best golf drivers, keep up to date with all the latest golf news with Golf Monthly’s Social Media Channels.