With a climate perfect for golf, let's reel off some of the courses you should think about visiting in Spain.

A stunning view of the 18th hole at La Reserva

The Best Golf Courses In Spain

It seems every region in the country has embraced golf and with so many brilliant courses to choose from, we have taken a look at some of the best below.

Originally named Sotogrande New, this Robert Trent Jones Senior design is often likened to Augusta. It is known throughout the world both as host of he dramatic 1997 Ryder Cup and for its regular staging of the Volvo Masters.

Seve Ballesteros and Kyle Phillips have both made changes, and the par-5 17th, protected by a pong and closely-shaven run-off area, remains admired and feared.

The course is presented in immaculate condition and represents the bar to which all others aspire.

El Saler was one of the first golf courses to be designed ecologically, specifically to be integrated into a protected landscape in as natural way as possible.

The terrain varies from links land, reminiscent of some of the famous Scottish golf courses, to areas of typical Mediterranean pine forest and the course features local plants such as umbrella pines, juniper, thyme and cat’s claw.

One of the most well-known holiday destinations for sun-seeking golfers, Sotogrande has constantly reinvented itself to meet the ever-increasing expectations of its visitors. Usually in tip-top condition, some consider it to be a worthy rival for Valderrama.

Whilst not too demanding from the tee, its main defence is the elevated and sloping greens that mean the golfer must plot his way round strategically.

Designed specifically to host professional events, this is effectively Europe’s equivalent of the TPC at Sawgrass.

A host of several pro tournaments, it is easy to be beguiled by the stunning setting with the Pyrenees on the horizon. However, concentration is vital as the beauty is matched by the difficult. Pine trees, heather, strategic bunkers and water are attractive to the eye, but also damaging to your scorecard. 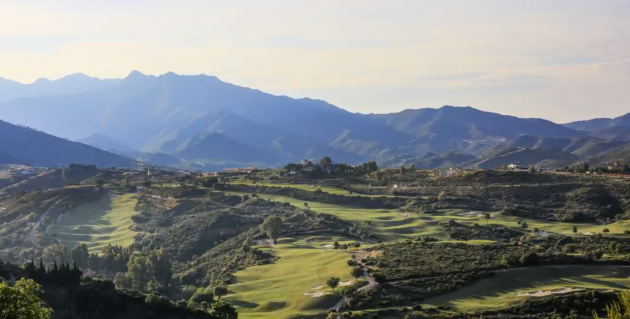 Pictures struggle to depict how these three golf courses have been built up in the mountains above Mijas, especially from an engineering perspective. All three courses at La Cala (America, Asia, Europa), were designed by Cabell B Robinson.

The championship course at this magnificent resort, now with its own luxury hotel, is another Cabell B Robinson creation on the Costa del Sol midway between Malaga and Gibraltar.

One of Europe’s longest courses, it serves up drama aplenty as it plays its way through a spectacular valley, with water, trees, changes in elevation and over 100 bunkers standing between you and success.

More than 1.5 million cubic metres of earth were moved during construction, and there is an aquatic system with water flowing continually in a closed circuit forming a series of lakes and rivers.

Robert Trent Jones has also crafted one of Spain’s oldest courses at Las Brisas. Established in 1968, Las Brisas is characterised by a number of artificial lakes that are beautifully complemented by the natural landscape. The trees lining the course come from all over the world, as have the professionals who have triumphed here, including Jack Nicklaus and Nick Faldo.

Seville is the historic capital and the most populated city in southern Spain. Regarded as one of the hottest places in Europe, it’s truly sweltering in the summer, but is hugely popular with tourists who flock to Andalusia’s capital looking to indulge in its 3,000-year history. Its Real club was designed by Jose Maria Olazabal and has hosted several Spanish Opens as well as a WGC-World Cup event in 2004.

Las Colinas Golf & Country Club outside Alicante is one of Cabell Robinson’s finest creations. Set across attractive rolling landscapes, many of the fairways follow natural valleys and the greens are perplexingly undulating.

La Reserva Club opened in 2003. The handiwork of Cabell B Robinson once again, the course enjoys a spectacular mountain backdrop over some of the area’s higher terrain and makes excellent use of the rolling landscape.

The course has tournament pedigree thanks to hosting the annual La Reserva de Sotogrande Invitational hosted by Annike Sorenstam on the LET. It is also centred around a luxurious family-friendly country club with Spain’s only private man made beach.

Lumine Mediterranea Beach & Golf Community, an hour from Barcelona in the Tarragona region on Spain’s eastern seaboard, is a thriving resort that opened just over ten years ago. It boasts two beautiful 18-hole courses – the Lakes and the Hills – plus the nine-hole Ruins course, where intriguing 200BC Roman remains on its 1st and 9th holes are an eye-catching feature.

La Manga remains one of Europe’s very finest golf resorts thanks to three excellent golf courses as well as a wide range of other activities and sports to try. Of the three layouts, the West is the toughest and prettiest of the three, weaving its way through pine-scented woodland.

On a hillside in Tenerife with spectacular views out to sea, this resort course features lakes and a waterfall and is enormous fun.

Son Gual is a superb course maintained in wonderful condition with a clubhouse that serves sumptuous food. The greens are large, with subtle breaks and borrows and set within carefully crafted run-off areas. Good holes abound, such as the 15th, the only par 3 on the second nine and played over a sprawling bunker to a raise green.