“That’s a bit out of left-field, Dave”, you might be thinking. Actually, that’s a song BY Leftfield (& Lydon).

Only a couple of weeks ago I saw Johnny Rotten screaming those very words on the stage at Finsbury Park, all bulging eyes and saggy skin, with most of the convened Stone Roses fans apathetic to the rhetoric of this paralytic old geriatric.

But it’s in my head today, because Open season is here. Irish last weekend, French this, Scottish next and then THE Open after that; and it’s all wide open.

Paul Casey (50/1 on the Betfair Sportsbook) went one better than his 2006 attempt but off the back of recent form reading CUT/52/DNP/45/53 to claim all the threes and a zero, €333,330, in first place prize money on the Carton House Montgomerie Course.

The “inland links”, only half an hour west of Dublin, rewarded accurate play and excellent course management and sets the tone for subsequent French and Scottish Opens before the world’s best line up at Muirfield on July 12th.

Unfortunately, I did not manage the markets on either side of the Atlantic Ocean with quite the precision of Paul Casey, winner by three from Joost Luiten, who I backed each-way with Coral, following Steve Palmer’s Racing Post tip: 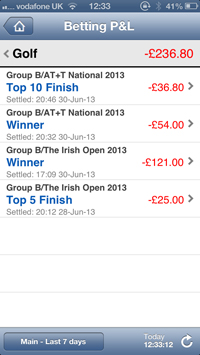 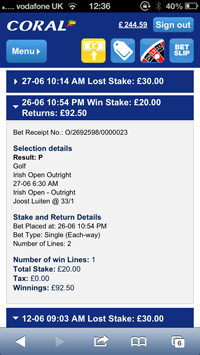 My shout last week was a double of Graeme McDowell and Seung-Yul Noh. They both missed the cut.

I was, however, pleased with the selection of Alvaro Quiros, who qualified for the Open following IFQ at Sunningdale and is undoubtedly a player of high quality, possessing as he does supreme power to split wide fairways and avoid their plentiful hazardous bunkers.

His inconsistency and lack of accuracy is his Achilles heel, and this was notable from the start last week as he began on 10 and was +4 just one hole after the turn.

I got on him at three-over, hence the excellent price of 25/1 with Coral for a top-10 finish, and I’ll be watching him, and compatriot Rafael Cabrera-Bello closely over the coming weeks.

Both Spaniards are favourites of mine: 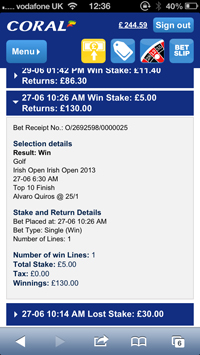 This week I fancy Manassero (25/1) in France and will stick with last week’s AT&T National winner and 2011 FedEx champion Bill Haas (22/1) at the Greenbrier in West Virginia.

Haas was 33rd in this event last year, runner-up in 2011 and is in supreme nick.

A £20 each-way Paddy Power double pays just under £13 grand and will put pay to the recent rot, leave me delirious like Johnny Rotten and open up many more options as we approach the next major of 2013.