Play-offs. As a Leyton Orient fan, I’ve been yearning for play-offs these past few weeks. As that dream slipped out of reach on Saturday (along with a speculative bet of £20 on Orient to be promoted at 33/1 with Bet365), golf goaded me with a European Tour record-equalling NINE playoffs holes in Valencia at the Open de Espana. Couldn’t one of those play-offs have been spared for the mighty Os?

Just as disappointing was the realisation that, in a vain attempt at thriftiness after a costly Masters betting experience, my decision to back David Horsey in the Spanish Open win-only market was fatally flawed.

His tie for fourth spot would have provided some returns (having been sent off a 33/1 shot for victory with Coral and Paddy Power paying a quarter the odds for top 5 finishes). Having seen Marc Warren, who traded at a low of 1.36 to claim the Spanish title, capitulate with four bogeys in the last five holes, eventually following up his 70-70-68 earlier rounds with a closing 76; I was fairly confident Charley Hoffman would follow suit at the RBC Heritage in increasingly blustery South Carolina conditions on the coast of the Hilton Head Island.

I layed £75 at 3.05, risking £153 if he went on to triumph, but his bogey-free 66 in the third round was not to be repeated and he dropped down five places with a back-9 containing five dropped shots, including a double-bogey at the tough par-3 14th hole. 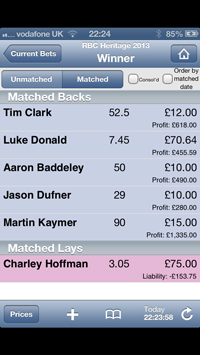 Following Racing Post tipster Steve Palmer’s in-play advice doesn’t always seem to be a path to profit (despite his pre-event staking plans regularly yielding the sort of fruit Nostradamus would dine out on), but his 11/1 tip on Graeme McDowell with Paddy Power seemed to make sense.

Obviously not a Leyton Orient fan, G-Mac went on to claim a playoff victory over fellow US Open winner Webb Simpson, his low-trajectory ball-striking and PGA Tour-leading scrambling netting me £551.25.

Luke Donald caught the eye (his conspicuousness guaranteed by the £70 I had on him at around 13/2), climbing 11 places in the final round yesterday. Martin Kaymer also stuck out like a sore thumb for different reasons.

Today I’ve backed McDowell at 44 on Betfair for this year’s US Open in typically knee-jerk fashion.

The best golf stand bags of 2020, including…

A selection of the best spikeless golf shoes…