After a couple of weeks Down Under, spent mercilessly antagonising antipodeans on account of their Ashes annihilation at the hands of their anglocestors, it feels good to be back in Blighty.

From the “G” to the G, the visit to Australia’s world-famous sporting stadium, the Melbourne Cricket Ground, was an unforgettable and emotional experience that I would urge anyone to witness first hand if they are given the opportunity.

Greg Norman’s driver from the 1980 Open Championship, immortalised in the MCG Museum of Sport, was one of many memorabilia momentos you simply have to behold in the flesh if you are in this sport-mad city. This excursion was followed-up with a brief holiday on the Emerald Isle – from County Monaghan to Galway City – where the “black stuff” was consumed heartily and merrily.

During the absence from these pages (let’s say over the past 30 days for the ease of observation on the iBetMate iPhone app), my golfing P&L has returned a profit in excess of a bag of sand. A grand plus a few grains:

Highlights from the balance sheet include:

–   Tommy Fleetwood’s 80/1 breakthrough win at the weekend, tipped elsewhere on golf-monthly.co.uk by an esteemed colleague 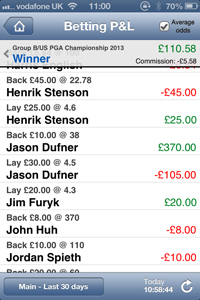 –   and Tiger Woods’s 9/2 Bridgestone bombardment, which I wrote about in my last blog. Credit, I must acknowledge, goes to the Racing Post’s Steve Palmer, who picked Dufner as his headline for the final major of the season, and Fleetwood as an outsider worth chancing on last week.

The RP’s golf gambling guru has been seemingly firing on all cylinders since turning his bachelor pad “haven” into a co-habited tenement of tranquillity.

May his happy relationship long line our pockets with profit.

So, in Rose, Scott, Mickelson and Dufner, we have four fully-deserving major champions at the peak of their powers etched on the trophies of 2013.

The likes of Fleetwood, Ilonen, Mannassero, Gallacher and Olesen signal a bright future of potential 2014 Ryder Cup rookies, and the renaissance of Stenson and the evergreen Miguel Angel Jiminez adds depth of character to a sport strong in stature, and overflowing with opportunity.

It’s good to be back amongst it, and looking forward to finding some FedEx value for next week…

We take a closer look at the best…