Having teamed up in 1986, Coore and Crenshaw have an impressive golf design resume.

What Courses Has Coore And Crenshaw Designed?

Bill Coore and Ben Crenshaw have been restoring, renovating and designing courses for just over 30 years now after they created their firm Coore and Crenshaw Inc back in 1986.

According to their website; “Theirs is an architectural firm based upon the shared philosophy that traditional, strategic golf is the most rewarding, and the creation of courses that present this concept with the greatest artistry is the ultimate goal. They have blended their personal experience and admiration for the classical courses of Ross, Mackenzie, Macdonald, Maxwell, and Tillinghast to create a style uniquely their own.”

No doubt they have produced some of the most stunning and creative golf courses on the planet and below we have taken a look at some.

The pair designed two more courses that were added to the impressive Bandon Dunes resort in Oregon. Bandon Trails came first as it opened for play in 2005 and features an 18-hole course that some say is like Spyglass Hill. The Bandon Preserve is a 13-hole par-3 design that opened in 2012 and is excellent fun.

They also worked on the newest addition to the resort, Sheep Ranch which is truly incredible. Stretching along the coastline, the routing was a challenge but somehow they have made good use of square inch of land there. Interestingly there are no formal bunkers too because the wind is so severe there. 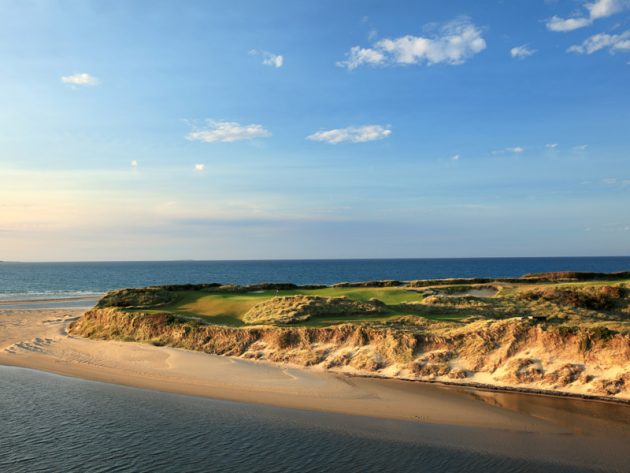 It was not an easy task to create a course that can compete with the original design at Barnbougle, the Dunes course. But Coore’s Lost Farm does just that with its two extra par-3s that mean their are 20 holes for you to enjoy.

Like Barnbougle above, Coore and Crenshaw were once again under pressure to deliver and compete with a brilliant neighbour as they set about designing their Cabot Cliffs. Just down the road is Cabot Links, a course that burst onto the golf scene when it opened. Once again though the two architects delivered a course that, to many, exceeds its neighbour. As you can see from the image above, it is simply spectacular.

Opened for play in 2003, Friars Head is located just a stones throw away from Shinnecock Hills in New York. It is rugged, majestic and Bill Coore is said to have admitted that of all the projects he and Crenshaw had worked on, Friars Head was one of the best.

Host to the Tournament of Champions, the Plantation course at Kapalua is of course stunning with the 663 yard 18th taking a lot of the plaudits on that front. Back in March 2018 a multi-million dollar improvement project which Coore and Crenshaw would oversee.

They did not design Pinehurst No.2, that was the work of Donald Ross. But what the pair have done is renovation work as old aerial photographs of the property were found. As a result they looked to increase the width of the fairways, remove rough, introduce more sandy waste areas and renovate a lot of the bunkers, all in the name of returning the course to its original layout.

George C. Thomas designed Riviera originally with Coore and Crenshaw coming in to renovate the bunkering in 1992.

Often at the top of the list when looking at the pairs designs, Sand Hills has shot to fame mainly because each hole is as brilliant as the last. Given the abundance of land at the Nebraska location, it would have been easy for them to design a hundred holes but they settled for 18 and they do not disappoint.

As far as fun rounds go, Shanqin Bay delivers on all fronts. It is quirky, difficult and yet wide in other parts so your game best be on if you’re lucky to get a round there.

Tom Doak was designing the Blue course at Stremsong Resort at the same time as Coore and Crenshaw were doing the Red. The latter is tighter with more water hazards coming into play despite being around the periphery of the property.

Check out some of the best golf caps…