A few things conspired against me last weekend.

A scintillating first Ashes test match, a staggeringly surreal stag-do in Amsterdam and, subsequently, a surrendering to sleep on Sunday night meant that Jordan Spieth’s 33/1 heroics in the John Deere Classic surreptitiously sneaked by, leaving me skint. 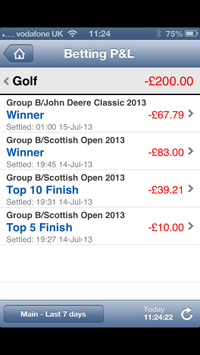 I had Spieth onside for the US Open last month. The Texan teenager seems unreal: US Junior Amateur champion in 2009 and 2011 (only Tiger Woods matches him for multiple titles), six top tens in his short professional career thus far, and then on Sunday just gone he triumphs in a three-way sudden-death playoff against David Hearn and former John Deere winner Zach Johnson.

It means Spieth becomes the first teenage PGA Tour winner in 82 years (yep, Tiger didn’t go pro until he was 20) and as a special treat, he now lines up against the world’s best this weekend at Muirfield, having been granted entry into the 2013 Open Championship.

A double-carpet last week, he can be backed to lift the Claret Jug at 180/1 with youwin.com or 150 everywhere else.

Make sure you keep an eye out today for bookies competing for your business. Victor Chandler are paying each-way terms for The Open of eight places, quarter-the-odds.

Paddy Power, Stan James and William Hill offer 7 and as I type Fred has just gone eight places too.

Tiger Woods at double-figures has tempted me in and, having missed the short-lived 12/1 with Ladbrokes, I’ve had a hefty stake with Power each way at 10/1 before topping up with Hills this morning as they pushed the three-time Open champ out to 11/1 for a maximum stake of £50. 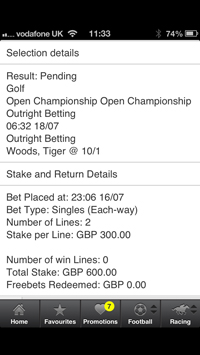 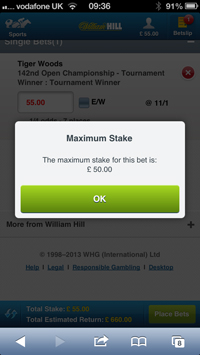 Muirfield denied Tiger a shot at the Grand Slam in 2002, the course and weather relentless and ruthless in handing him a career-low third-round 81.

He recovered to shoot a Sunday 65 and will be keen to gain revenge on this demanding links course, where accuracy and clarity of course management is at a premium.

Bite the bookies’ hands off for 10/1 or bigger, and add Els and Mannassero to your armoury for the weekend. Laying Sergio Garcia for top Spaniard looks a good play to me too and I like Jiminez to get the better of his compatriots in that special market. He’s around 13/2 to do so.

People will like Scottish Open 22/1 winner Phil Mickelson’s chances, but he nearly threw it all away at Castle Stuart on the 18th before prevailing in a play-off over Branden Grace.

I ignored Lefty last weekend when he had an exceptional chance – I can do without him at a stingier price against superior opposition this time.