It’s not been a week for the weak: an emotional rollercoaster that has asked questions of this passionate punter and self-styled bon viveur.

I spent Friday night in amongst the [largely] peaceful protesters in Istanbul’s Taksim Square, where European tension could be felt in such abundance you might have been forgiven for thinking you were back around the 17th green at Medinah.

That is if the Ryder Cup venue had been frequented by masked graffiti artists jubilantly jumping around atop burnt out public vehicles. 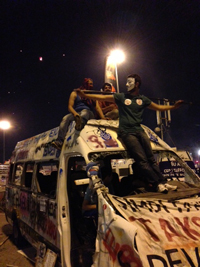 I hadn’t really been able to gamble in Turkey. I mean, I was able to get a raft of bets on with Stan James on my mobile, but Betfair’s app repeatedly flashed up the error message: “User Restricted Location”.

There I was, stressed out trying to get the best possible prices at 2am Turkish time, making an international call to one of the exchange’s helpful customer service representatives, all to get my ultimately unsuccessful £150 down on Bernd Wiesberger for the Lyoness Open. I added Tom Lewis to the portfolio at 135/1, who started flawlessly but failed to capitalise, and followed the Racing Post’s in-form golf tipster Steve Palmer in on Joost Luiten (20/1) and Romain Wattel (55/1), my confidence in the first of those picks later bolstered when I discovered that the William Hill podcast boys opted for the same player.

The pod was banned from the Turkish airwaves by the regime against which my comrades were demonstrating… they must have all been keen to have a hefty wager too? And rightly so: Luiten won, Wattel placed – tear gas and water cannons would not have been required if I hadn’t been able to get on.

Arriving back into London on Saturday, I headed to Finsbury Park to worship The Stone Roses, whose reunion has made grown men cry and whose masterful set-list resembled something close to perfection.

Heart-strings continued to be plucked this afternoon with the extremely sad news of the death of legendary racing trainer Sir Henry Cecil. I hope you don’t mind me punctuating this light-hearted piece with a genuine mention for the great man: rest in peace, Sir Henry.

Moving onto this weekend’s Major, I’ve backed Manassero, McDowell and Woods so far and was excited by Mickelson at the weekend, who I backed for the FedEx St Jude before the final round, whilst laying Stefani and Stallings at short prices, partly covering pre-tournament wagers. So here we go: US Open podcasts downloaded, official PGA app installed, bookmakers’ offers scrutinised, GM microsite adorning my desktop and eagerly anticipating the 8pm iPad edition of the RP. I’ve even started following another tipster on Twitter, who seems to know his onions: @NicsPicks

A weekend of high-octane golf gambling awaits… if my emotions can take it! 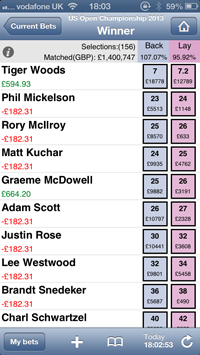